Welcome to the Dice Hate Me Games online store!

Dice Hate Me Games is back! And indie as ever. Our current offerings are listed below, and you can get started by clicking Join to the right to create an order.

SHIPPING: we are currently only shipping orders to the United States, Canada, and Mexico. 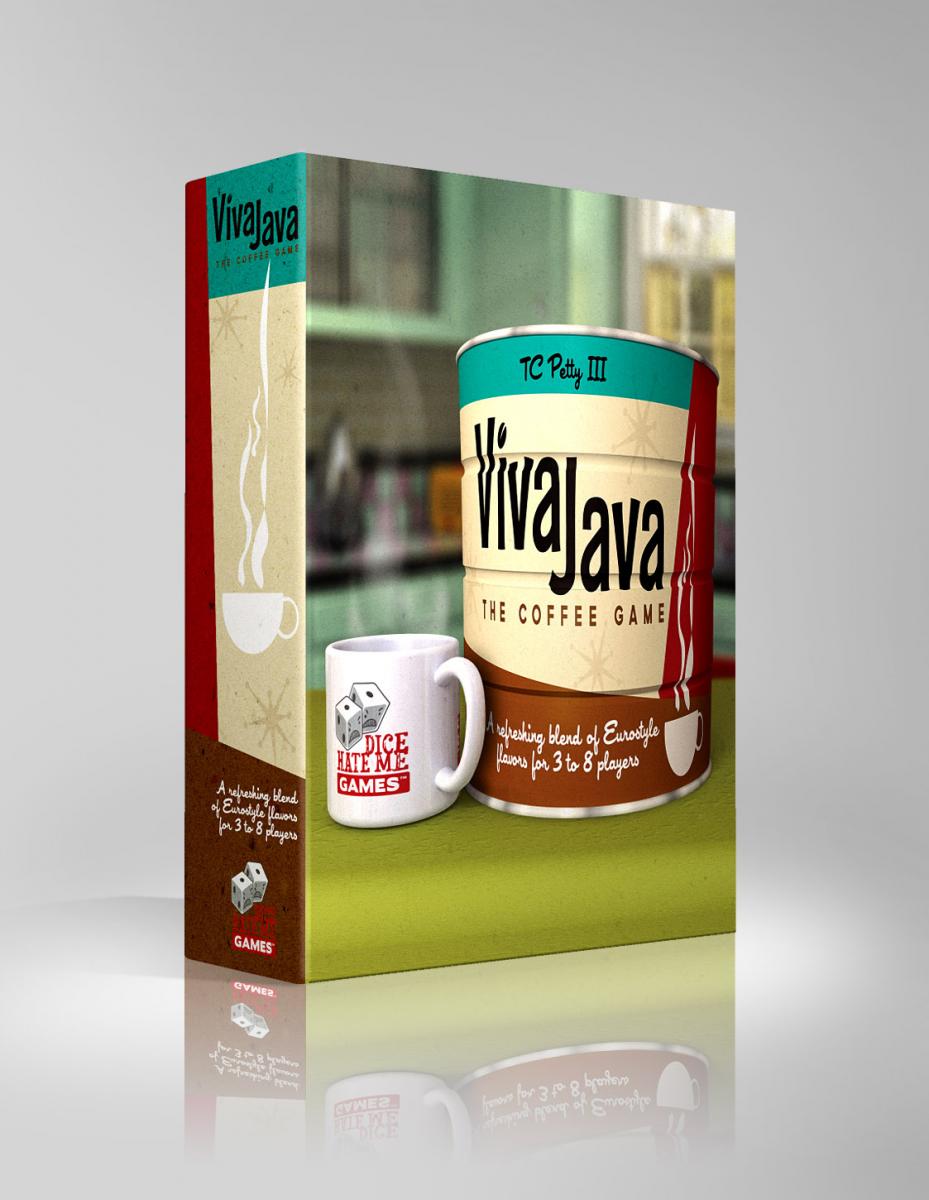 A Refreshing Blend of Eurostyle Flavors!

VivaJava: The Coffee Game is all about finding that perfect blend of beans to create the next best-seller in the coffee houses and kitchens of the world.

In the game, players send their researchers to hot spots around the globe to gather the perfect bean. This may bring them into contact with other players who are also on the hunt, creating a crucial choice: Go it alone and continue to research, or join forces with that opponent, hoping to combine beans from both player’s bags and share the score with a superblend. Research can often prove useful as players spend time in the lab developing abilities that grant them an advantage. However, in VivaJava the bold taste of victory will go only to those players who are able to balance solitary research with cooperation amongst their fellow gamers. 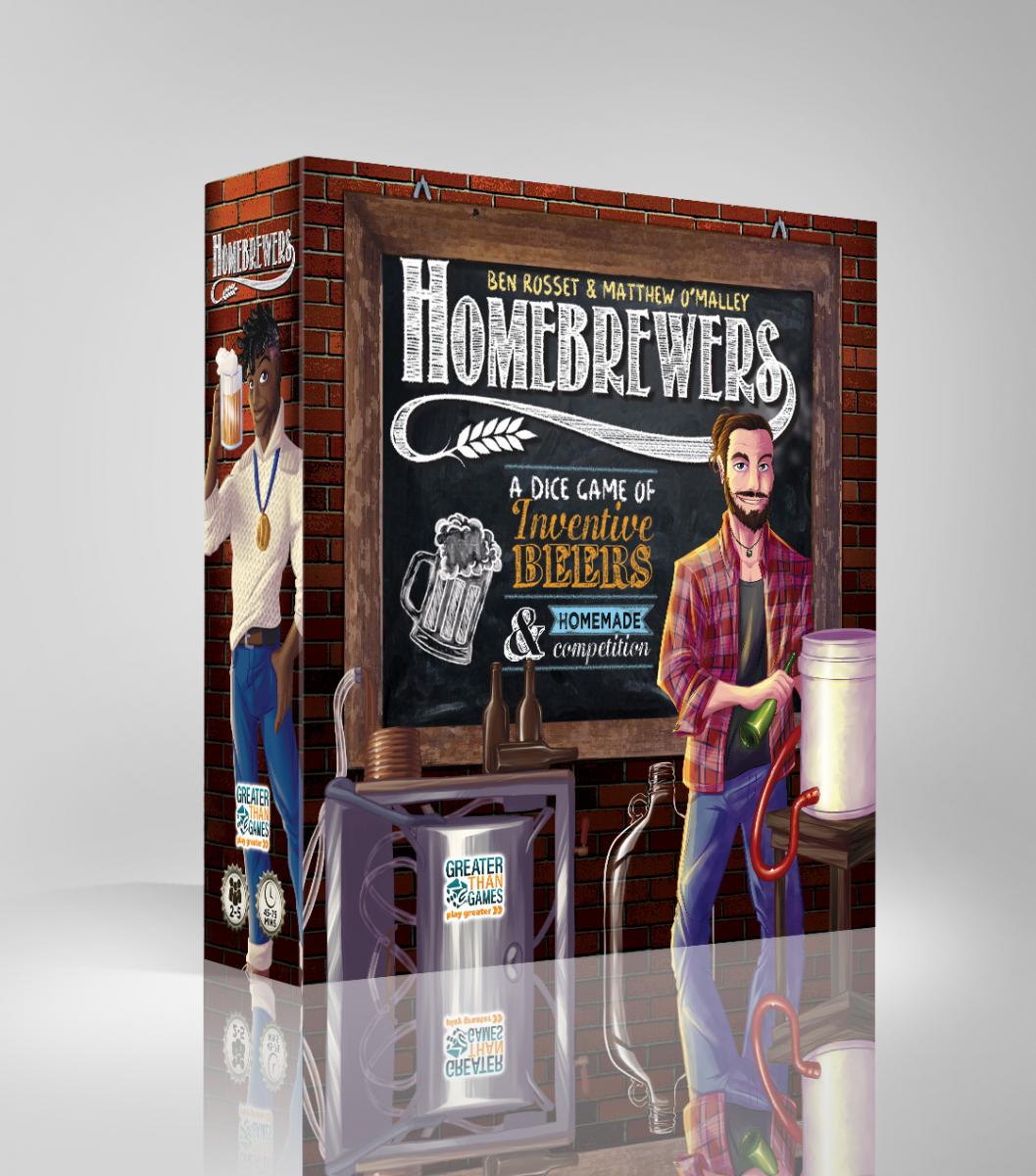 Welcome to the Hobby of Homebrewing!

Homebrewers is an engine-building and dice-trading game. Your dice represent the actions you can take, such as buying ingredients, participating in monthly events, adding flavors to your recipes, and of course, brewing beer! Homebrewers is played over eight months (eight rounds). Each month, you meet with the homebrewing club one weekend (trade phase) and take actions the other weekends (action phase).

You'll be crafting your own unique beer recipes in four categories (Ale, Porter, Stout, and IPA). Each time you brew a particular recipe, your quality level for that recipe increases.

You gain reputation in two main ways. First, by moving up the quality tracks for the four beer categories in order to win medals at Summerfest and Octoberfest, and second, by crafting your recipes to meet the particular tastes of a panel of judges at Octoberfest.

At the end of eight months, if you've gained the most reputation as your club's best brewer, you win! 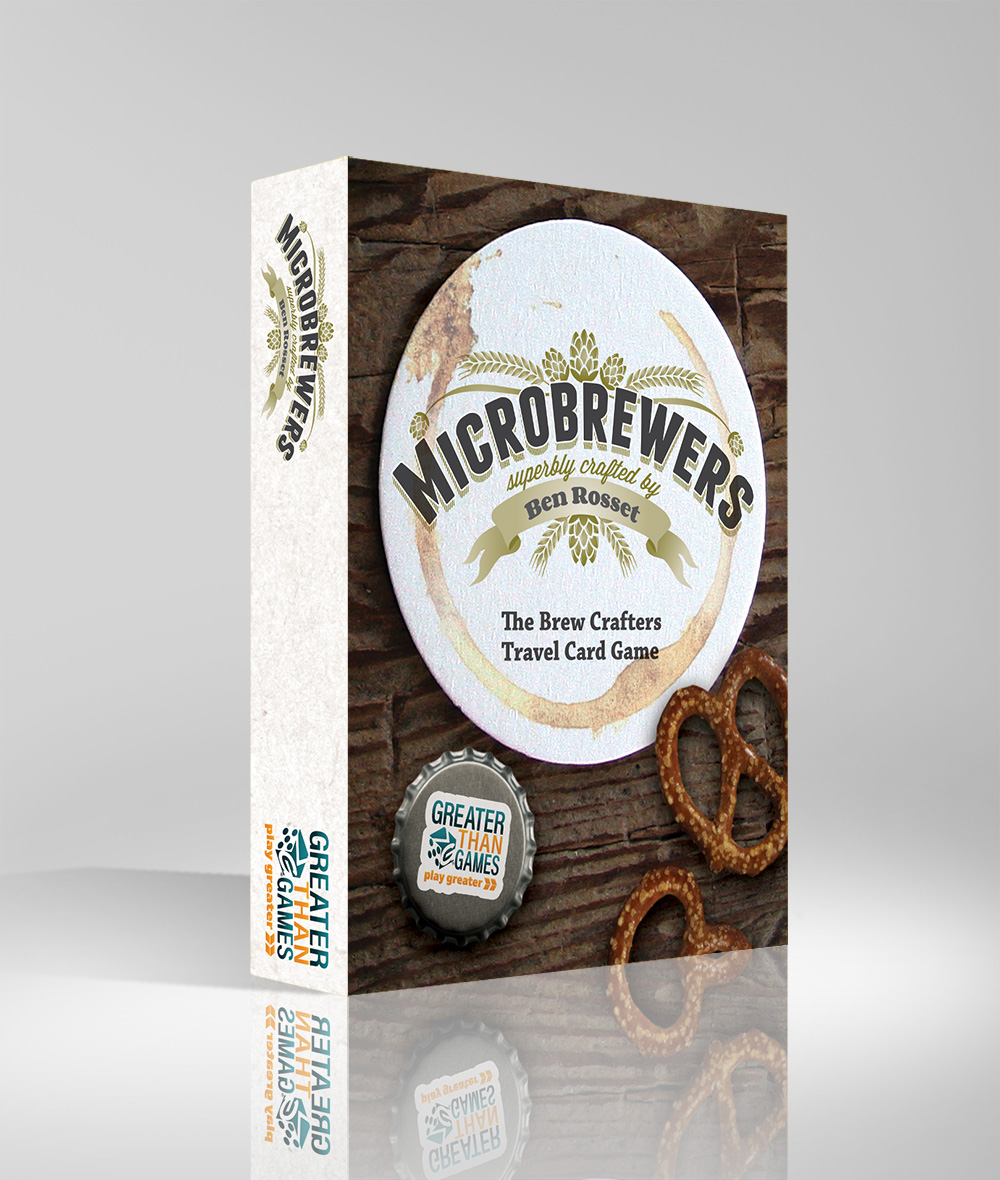 Your Brews Might Be Small, But Your Operation is Mighty!

In Microbrewers, you've opened your own brewery and are competing with other brewers in town to be named the best microbrewer of your city. You'll build your brewery by installing equipment and hiring workers, and then get to work brewing your beer! The player that earns the most reputation as the city's best brewer will win! Microbrewers is based on the Dice Hate Me Games release Brew Crafters. 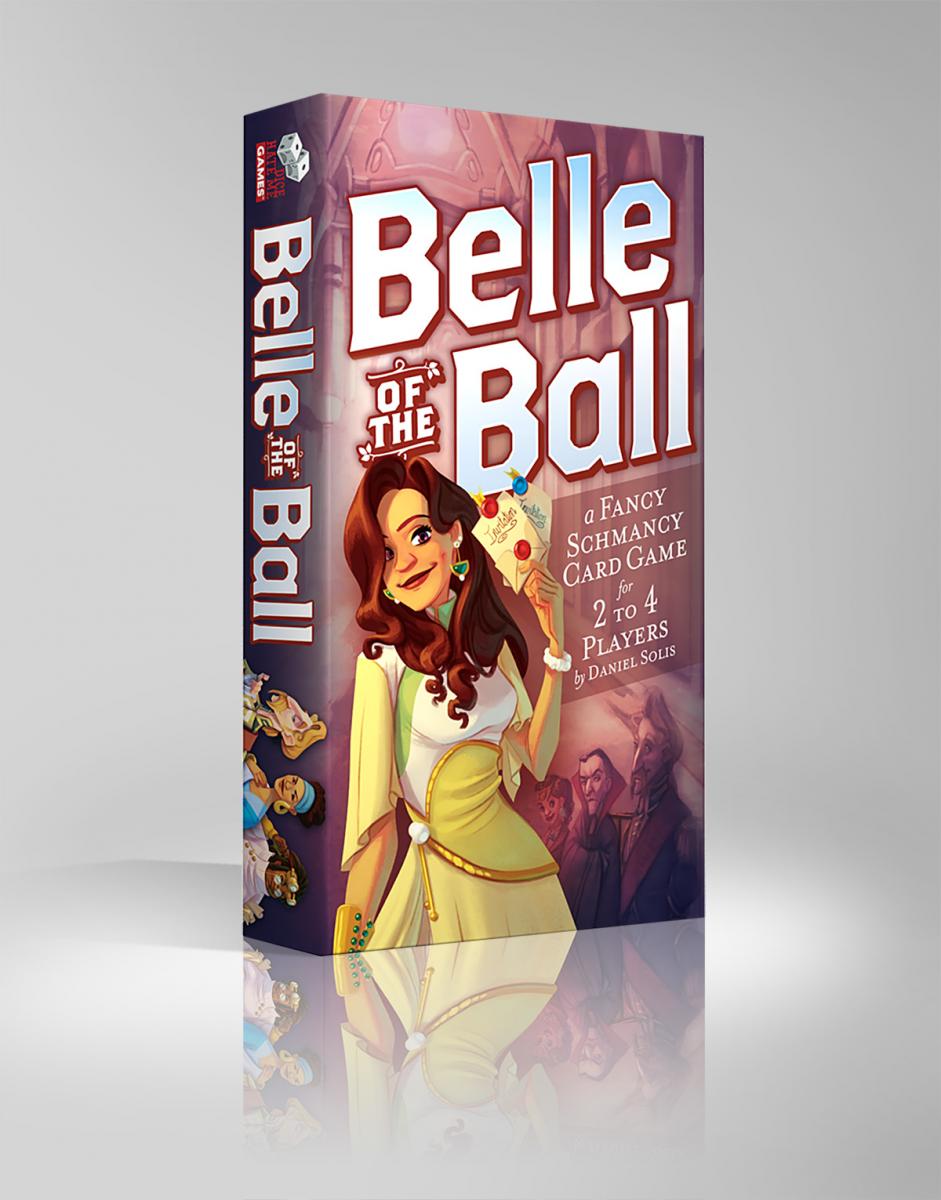 Belle of the Ball

A Fancy Schmancy Card Game!It is the eve of Carnivale on the magical Victorian isle of Ludobel, and you are all invited to the fantastical festivities!

In the card game Belle of the Ball, players take on the roles of party hosts, seeking the best mix of guests to make their gala the greatest by the end of the night. In order to ensure that they stay one step ahead of the other hosts, players will have to carefully watch the growing line of guests at the door, inviting those in that seem to share passions with partygoers already inside, all the while handing out their precious stash of Regrets to those who should seek refuge elsewhere. Of course, other hosts may find it advantageous to invite a rejected guest inside just to collect their accumulated Regrets for later use.

Hosts may also choose to ignore the competition for guests and instead try to earn the favor of the Belle of the Ball herself, whose charms can make or break any party. 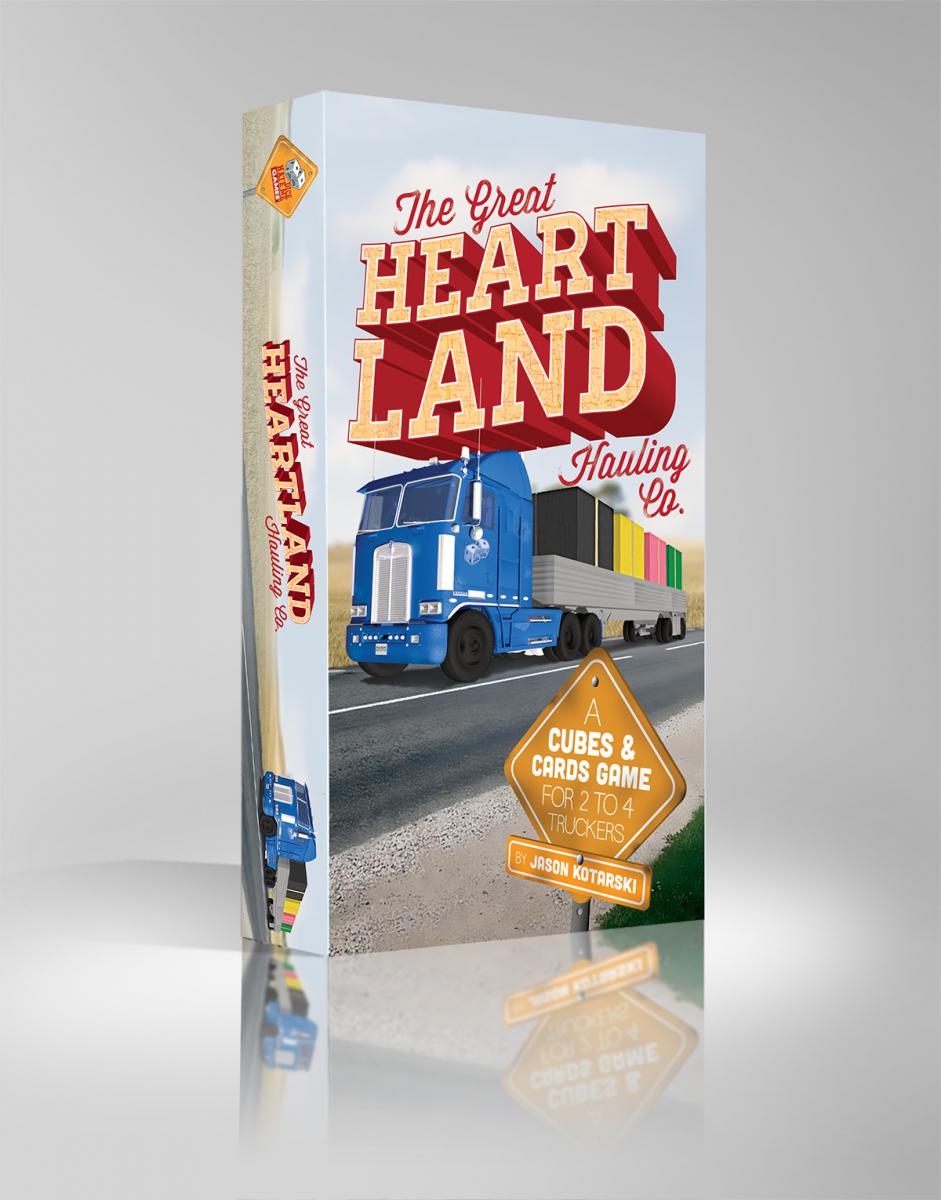 Time to Just Keep on Trucking!

In The Great Heartland Hauling Co. players take on the role of medium haul Midwest truck drivers doing their best to make a living by hauling goods for big suppliers. Players truck to various locations around America's Heartland, picking up and dropping off goods using matching cards from their hands. Most locations have native goods that require fewer cards to load; other locations may pay a premium for those goods but may also require more fuel – and time – to get there with the cargo. With limited space in each trailer and only five cards in hand at a time, players will have to expertly manage their resources, as well as play the odds and press their luck to be the best trucker on the road.

The Great Heartland Hauling Co. offers a lot of replay value through the use of cards to create a variable board set-up each game. The game includes 60 goods cubes, four thick cardboard trucks, and 46 resource cards – required for pick-up and delivery – that are drawn from a shared draft board, as well as 20 fuel cards, which are used to move about the Heartland. 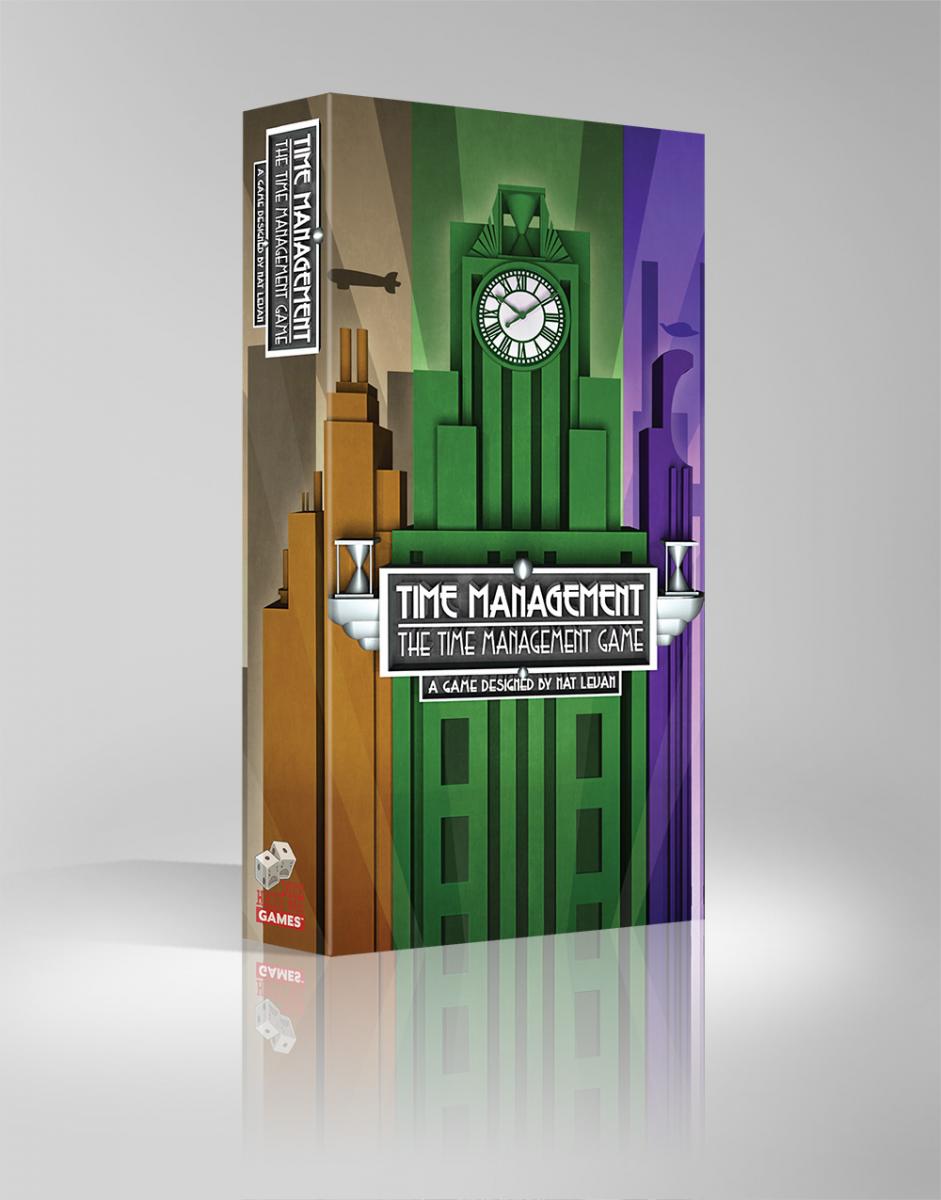 Things Are About to Get Meta!

Time is money, especially when you manage the space-time continuum at the Office of Time Management. You’ve got a deadline, and it’s up to you to keep the office - and time itself - running smoothly. You have (really) flexible hours, but you’ll need to complete projects, hire temporal workers, and carefully manage time and space itself in order to earn your hours and keep your job!

Time Management: The Time Management Game is a quick-playing, tile-laying game. Players are workers at the Office of Time Management, managing the space-time continuum. Their goal is to add temporal workers to the work force and arrange them in such a way to ensure the safety of the continuum and to save time — and save time! 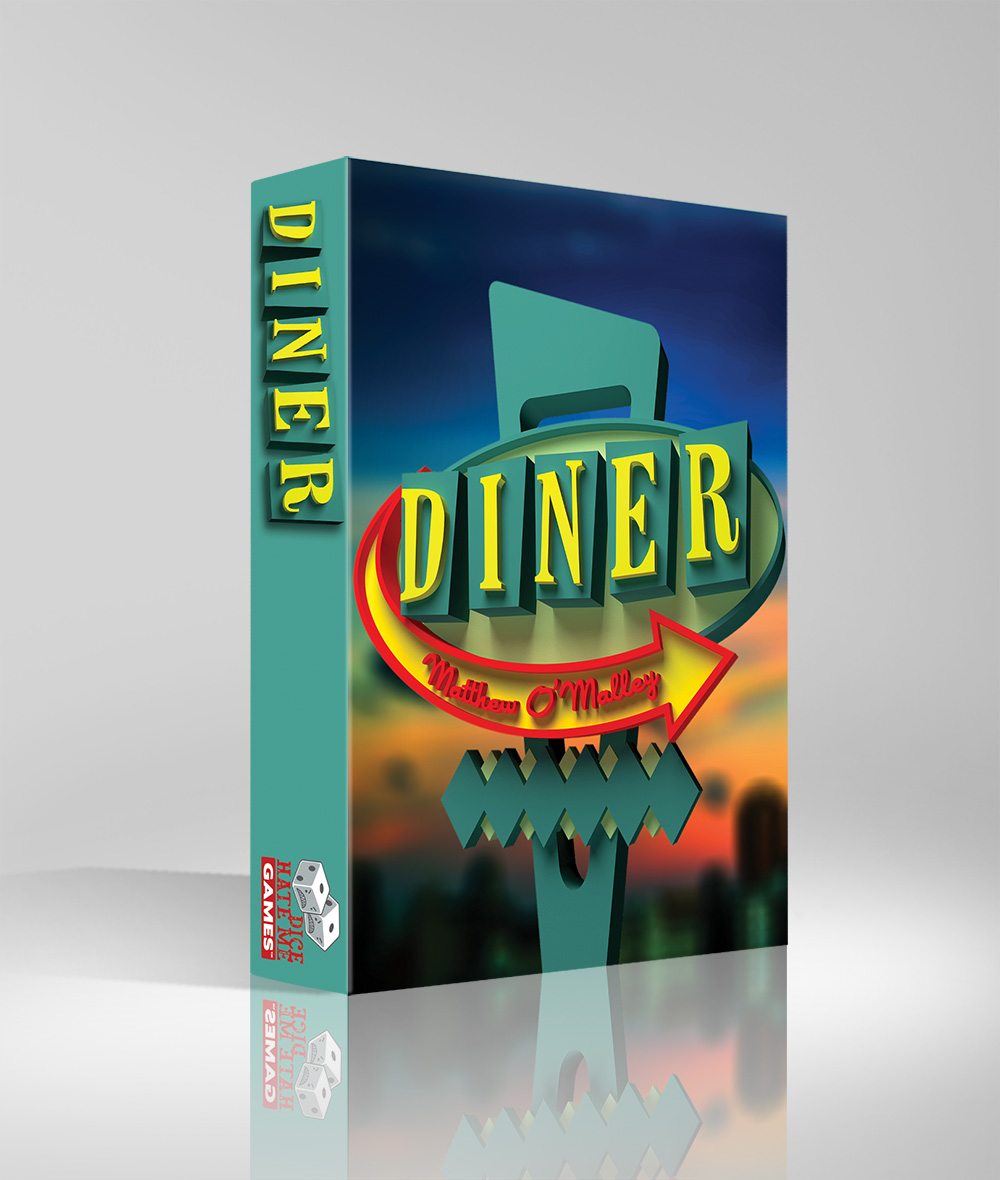 Diner is a fast-paced game about waiters in a friendly competition to make the most money in tips. Take orders for the tables in your section, gather the plates to fill those orders, and serve your tables, and do it as quickly as possible while showing up the other players.

Diner features a pseudo-real time mechanic that has players passing action tokens whenever they take an action; if a player does not have a token, that player can't take an action. At times, action tokens may accumulate in front of a player, allowing them to take multiple actions at once.

Diner is the winner of the Dice Hate Me Games 54-Card Challenge - a contest that challenged designers to create a game using only 54 cards and very minimal components. It was selected as the winner among over 100 participants. 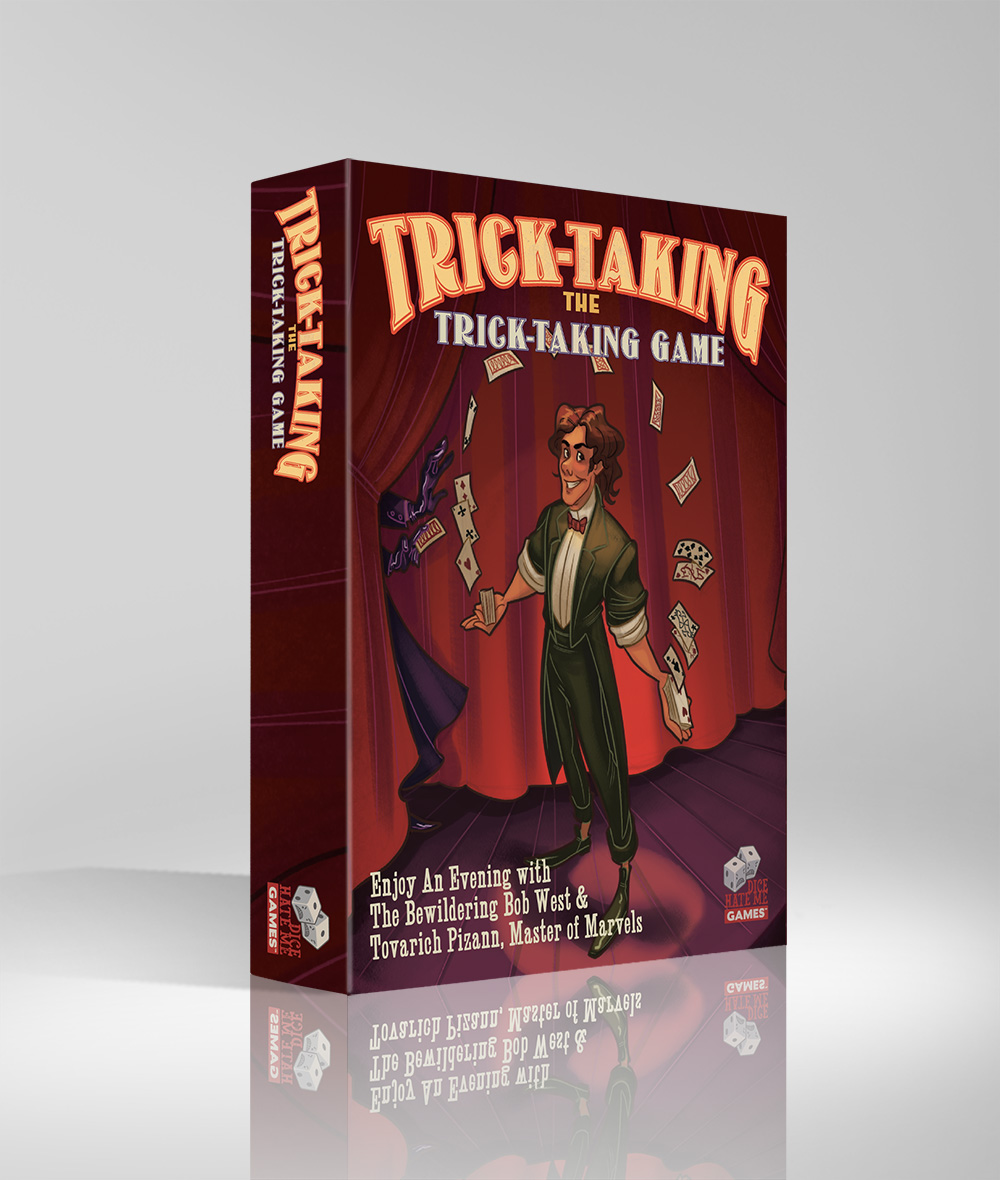 Astound your friends! Confuse your enemies! Compete to be the best! During the week of rehearsals, keep a close eye on your rival magicians and out-do their best tricks… or steal them. Conjurations, illusions, levitation - build up your collection of pilfered magic so that at the end of the week you can blow the audience away! 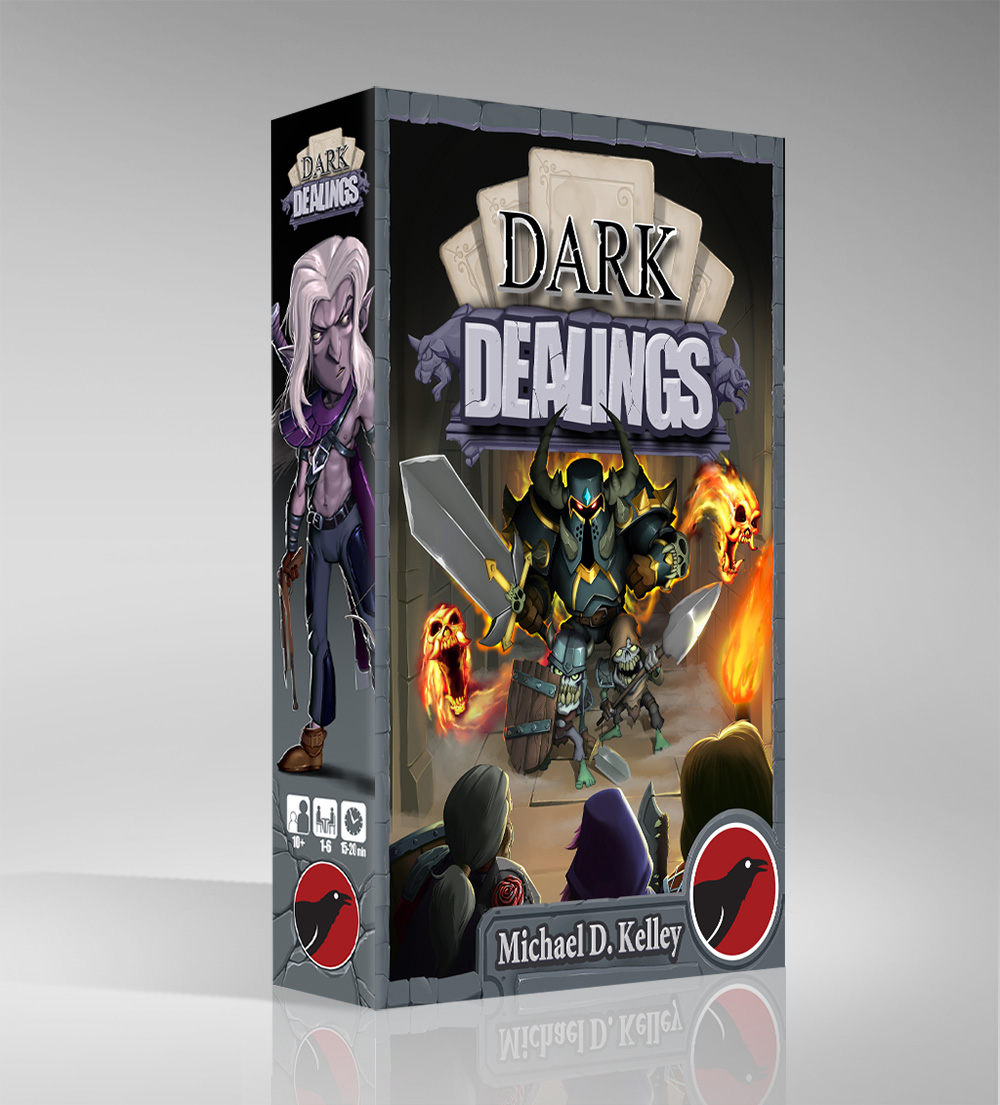 For Overlords of evil, doom, and sorrow, life is not fair. The local races, hackneyed halflings and dullard dwarves, fail to appreciate the time and toil that goes into perverting the laws of nature and defying death itself.

And now, after a few singed villages and poisoned wells, the locals are coming for you and your magical brethren. Stout Heroes of the land, mighty warriors and dexterous thieves, pious paladins and wily wizards, have banded together to bust down your gates and evict you from your dark castle.

Luckily, you are in contact with Dark Masters, beings man was not meant to know. They are ready to provide you dastardly traps, potent spells, and decaying corpses for reanimation, if you can demonstrate your bravery by facing the toughest Heroes.

Now it’s a competition to see which Overlord can withstand the siege. Well... you never liked your neighbors that much anyway.

Dark Dealings: Dwarven Delve takes players underground as the dark lords of subterranean dungeons and fortresses. The heroes are bent on chasing the dark lords from their lands, sending their mightiest dwarves to evict you from your lair! You have to use your new goblin- and troll-powered defenses to hold back the siege, or get evicted (again) — and let's be honest, moving is a pain.

This expansion to Dark Dealings contains 54 new cards, including new pesky dwarven heroes with a new ability called "TOUGH", and goblin- and troll-themed defenses with tricks up their sleeves! 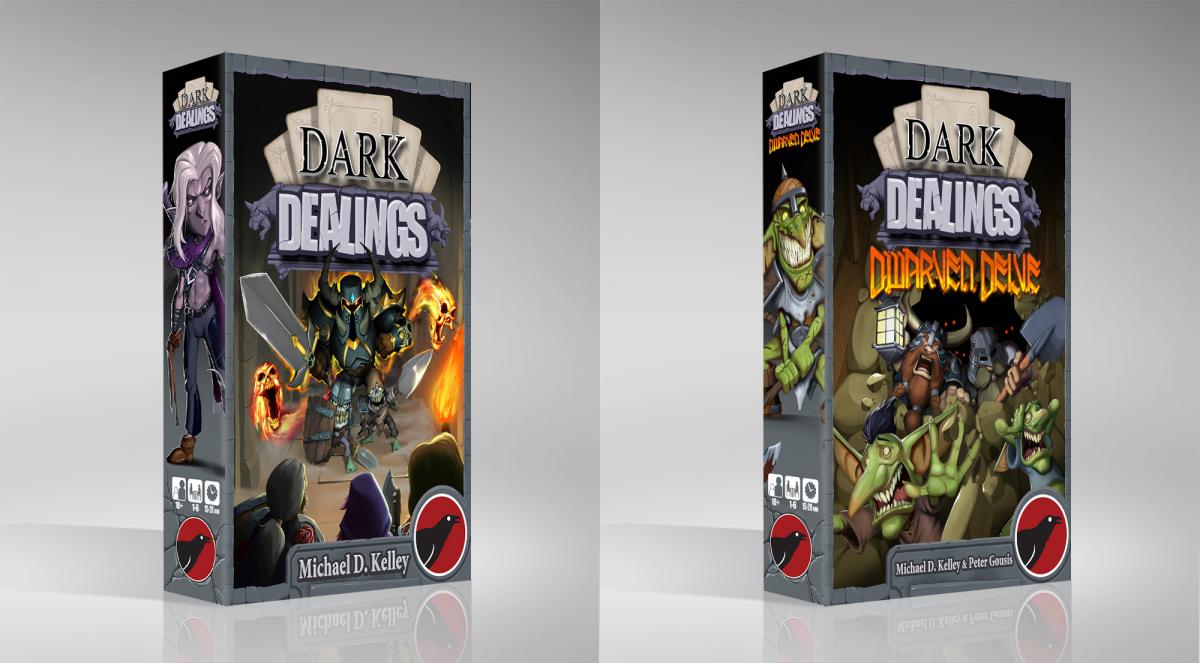 Get both Dark Dealings & Dwarven Delve for a great price! 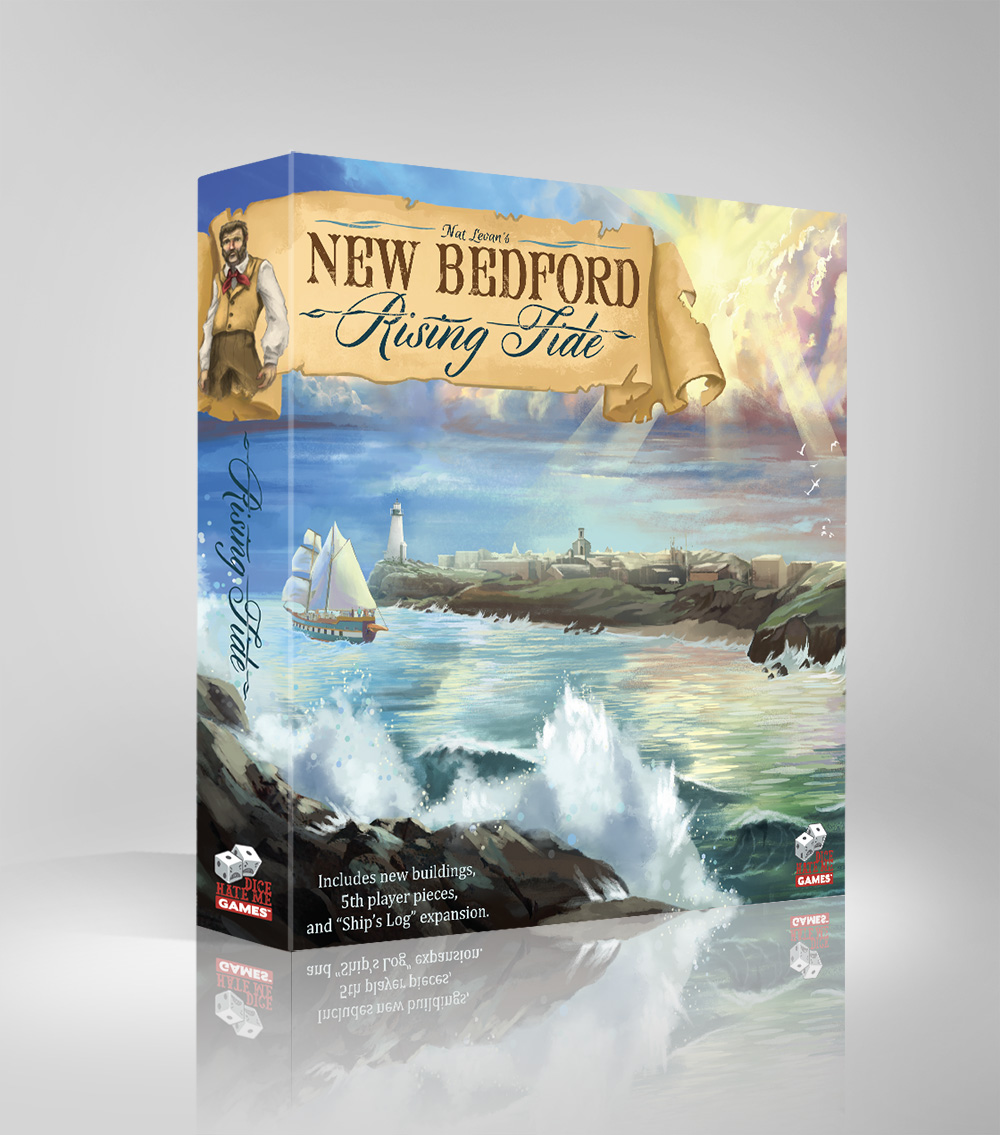 The Expansion to the Game of Whaling and Historic Town Building!

A rising tide lifts all boats, and in New Bedford that means the town is ready to grow. Rising Tide includes more ships and supplies for a fifth captain, and even more buildings to expand the town. Ships at sea will have tales to tell from the Ship’s Log, and while Providence favors the bold, darker Omens are also on the horizon. Catch the Rising Tide to take your game to new heights before the water is over your head.

NOTE: Rising Tide requires the New Bedford base game in order to play. 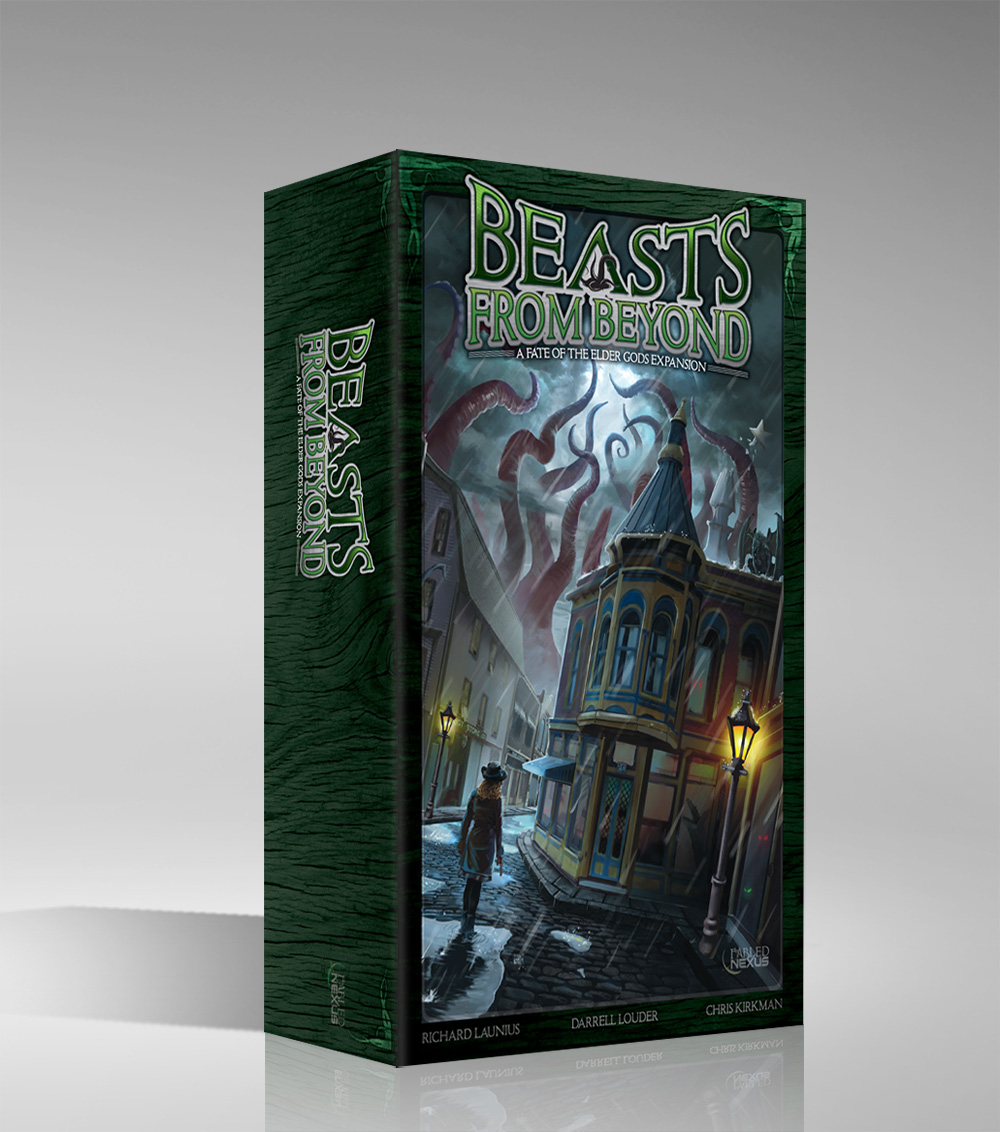 Fate of the Elder Gods: Beasts From Beyond

The Expansion to the Board Game of Lovecraftian Cults!

From the twisted growth on the outskirts of Arkham to the darkened angles in the very corners of withered homes lies a vast menagerie of evil waiting to be summoned!

With Fate of the Elder Gods: Beasts From Beyond, your cult will use new spells to make some of the most classic creatures from Lovecraftian lore do your bidding. Your cult will have a chance to bring forth the mysterious Mi-Go, the Dark Young, Deep Ones, Byakhees, Goat Spawn, Hunting Horror, a Hound of Tindalos, or even the terrifying, but unpredictable Shoggoth.

NOTE: Beasts From Beyond requires the Fate of the Elder Gods base game in order to play. 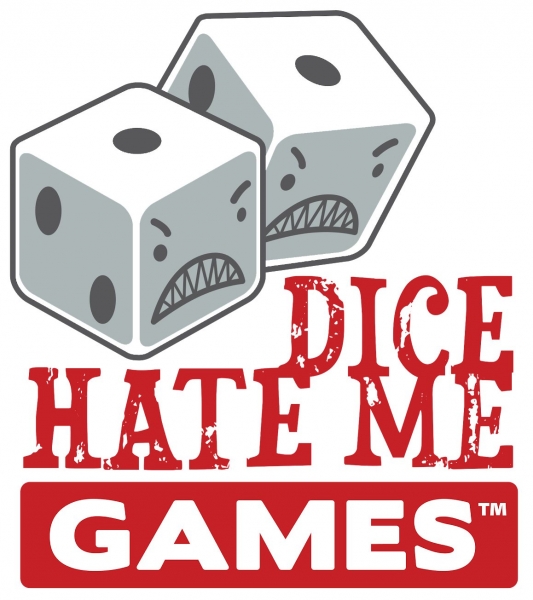 One last step to go!

Share your email, we will send you an invite!

If you're already have a PledgeManager account from another project, just sign in using the button below to join the project.

Complete your information below to get started!